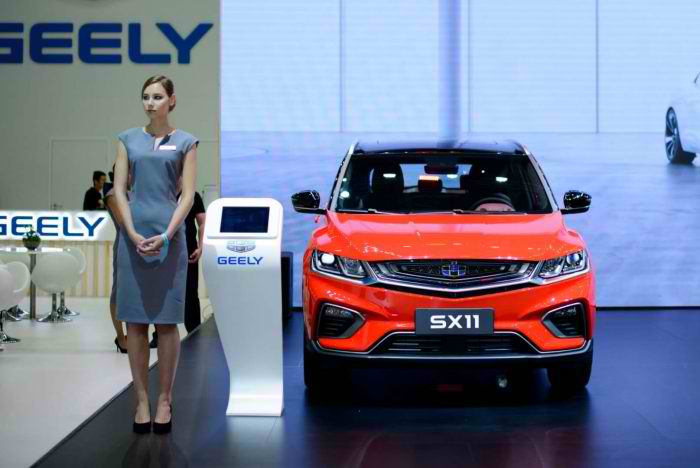 2018 August 29, Moscow. Geely Auto (Geely) presented six of its latest models launching in overseas markets including Russia at the 2018 Moscow International Auto Show. The main stars of the show were the global debut of Geely’s flagship hybrid sedan, Bo Rui GE and the B-Segment Modular Architecture (BMA) – based Crossover SUV, SX11. They were joined by newly face-lifted versions of the New Emgrand, Vision SUV, Emgrand GS, and Bo Yue SUV, which will be launched in Russian market in the near future. Geely Auto plans to launch 10 new models in various segments for the international market within the next 3 years.

Debuting globally in Moscow was Geely’s highly anticipated first BMA-based crossover SUV, the SX11. Geely developed the BMA to be a global vehicle architecture, which will become the foundation for future Geely models developed for domestic and global markets. The SX11 is equipped with a highly efficient three cylinder 1.5L turbo direct injection engine providing 177 horsepower that was jointly developed with Volvo. This leading engine is coupled with 7DCT dual clutch transmission. The SX11 is capable of accelerating to 100km/h in 7.9 seconds, making it one of the most powerful SUV’s at its price point.

Geely’s vision for the future of new energy was showcased in its flagship hybrid sedan, the Bo Rui GE. Through the combination of an electric motor with a 1.5TD engine, the high-end mid-sized sedan achieves a combined city/highway fuel consumption rating of just 1.6L/100 km and can accelerate to 100km/h in 7.4 seconds. The Bo Rui GE comes equipped with the latest high-tech systems developed by Geely including level 2 autonomous drive, integrated voice commands, GKUI Geely Smart Ecosystem, wireless charging, full-vision dashboard, and more.

Benchmarked against luxury models, the design of the Bo Rui GE follows an elegant theme. The sharp-edged exterior of the vehicle resembles water under tension, where the calm outward appearance implies a considerable power within. The interior serves as a third living space for its users with much attention paid to giving it a technological and luxurious feel. Its design was led by renowned luxury car designer, Peter Horbury, Executive Vice President of Design at Geely Auto Group. Under his leadership, Geely has established four design centers in China, Sweden, Spain, and the USA.

Zhang Shouhe, First Deputy General Manager of Geely Motors (Russia), said “Through the introduction of new models, Geely’s latest innovations and technologies will gradually enter into the market. Geely currently has four global R&D centers, one in Sweden, one in England, and two in China. It is through constant innovation that will Geely’s be able to realize its “20200” strategic goal of reaching 2 million in annual sales by 2020. Russia is is one of the strategically important markets Geely is engaged in. To strengthen our position in Russia, we are constantly expanding our range of product offerings, providing customers with affordable high-tech models.”

In addition to the new models shown, Geely demonstrated some of the ways they’ve localized production at their Belarus plant to produce tailor-made products for the Russian market. After studying the Russian road conditions, where salt and snow is common, Geely paid special attention to anti-corrision in the models produced for Russia. Vehicle parts susceptible to moisture and corrosion are made of galvanized steel, PVC coating was made thicker by 25% and the area where ​​sealant is applied was increased. In addition, after electro-coating is completed, Geely has installed vibration isolating panel in areas such as the hood, tail, front door, rear door, etc which improves NVH as well as increase resistance to corrosion.