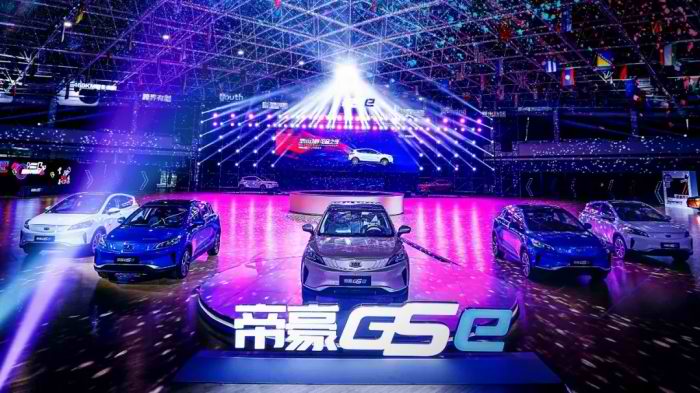 2018 June 9, Beijing. Geely Auto, China’s leading privately owned electric car brand launched its first electric crossover SUV, the Emgrand GSE in a fun-filled night, befitting the new model’s image as a youthful eco-friendly city car. The new model is Geely’s first electric SUV and second pure electric vehicle launched after the company’s entry into the new energy era in 2018. Based off the highly popular Emgrand GS and with a pure electric range of 460km, the GSE is set to create a storm in the electric vehicle market with its affordable price, attractive design, and technology standard.

In 2018, Geely Auto entered the era of new energy vehicles and announced its new energy strategy consisting of four technological pathways, hybrid, alternative fuels, hydrogen fuel cell, and pure electric. Through developing technologies along these pathways and launching new energy models with those technologies, Geely will become the world leader in energy-efficient technologies. The GSE is the second pure electric model of many yet to come.

Speaking at the launch ceremony, Geely Auto Group Vice President and General Manager of Geely Sales Company, Lin Jie said “ The market launch of the Emgrand GSE will really open up the Chinese electric vehicle market to Geely. It is the sound of the starting pistol in Geely’s race to becoming China’s new energy technology leader.”

Deputy General Manager of Geely Sales Company, Song Jun said “The Emgrand GSE is leading the way for Geely SUVs in the new energy era. Within the year, Geely’s Emgrand family of cars will fully electrify. With the launch of Emgrand GSE, a new salvo has been fire that will set off a storm in the EV market.”

The Emgrand GSE follows a sporty aesthetic design concept fusing functionality with fashion. It is tailored for young, urban, trendy consumers with a dynamic, powerful, and fashionable appearance. The GSE streamlined body is inspired by silhouette of a leaping leopard with lines drawn like flowing water, effectively reducing wind resistance. Its dynamic waistline gives it a speedy charm and 18-inch luxurious alloy wheels creates a powerful presence even while moving.

Through a unique close front grille and headlight design which lowers wind resistance, the Emgrand GSE achieves a balance of engineering-led design and trendiness. A change in the design of the air intake manifolds from the original Emgrand GS alter airflow from the front to the side, reducing headwind resistance.

The GSE’s new tail design is inspired by the majestic and graceful muscles of athletes. It uses fluid curves and multiple levels to create a unique image. The new three-dimensional tail highlights the sporty and urban nature of the car.

A 360 degrees integrated cockpit has been optimized to the extreme for NVH performance achieving a level of tranquility that exceeds even luxury models. The slush-molded dashboard uses a graceful arch bridge design inspired by the bridges over Hangzhou’s West Lake. The new central console uses a honeycomb design with matte metallic decorative strips that gives off a high-tech and three-dimensional visual effect. The eye pleasing blue-lit intelligent instrument panel uses a double barrel design inspired by the tail of a fighter jet gives off a sense of speed, technology, and fashion.

When it comes to electric vehicles, what consumers are most concerned about is the electric power technology behind the vehicle. The Emgrand GSE comes with Geely’s golden triangle of energy-efficient electric technologies, lightweight high-energy intelligent battery, HEDS highly-efficient electric drive system, and intelligent, efficient, electronic control system.

The GSE uses a 52kWh lithium battery from CATL with an energy density of 142Wh/kg, the highest in its class. The model’s cruising range exceeds 353km and at a constant speed of 60km/h it can travel over 460km. The GSE is also capable of highly-efficient charging, taking only 30 minutes to charge from 30% to 80%, unsurpassed in field of pure electric vehicles. Also included in the GSE is Geely’s ITCS 2.0 intelligent battery temperature control system which improves charging efficiency, prolongs battery life, reduce winter decay, and stabilizes battery usage at all temperatures.

Outstanding drive performance is provided by the permanent magnet synchronous motor putting out up to 120kW of power and 250n.m of torque. The GSE comes with two driving modes, ECO and Sport with ECO balancing power and economy and Sport focusing on performance. In addition, chassis and wheel alignment have been done to improve performance and make driving even more pleasurable.

As well as being in the new energy era, Geely is also in the smart connected vehicle era. High-end smart connectivity have been put into the Emgrand GSE through features such as mobile data, wireless charging, dual interactive smart screens, smart keys, etc. However it’s not just connectivity that makes the GSE smart, intelligence has been added allowing the car to understand its users. Just by saying “Hello, Emgrand” the interactive voice control system is activated. Music, navigation, air conditioning, windows, all can be controlled with just by speaking.