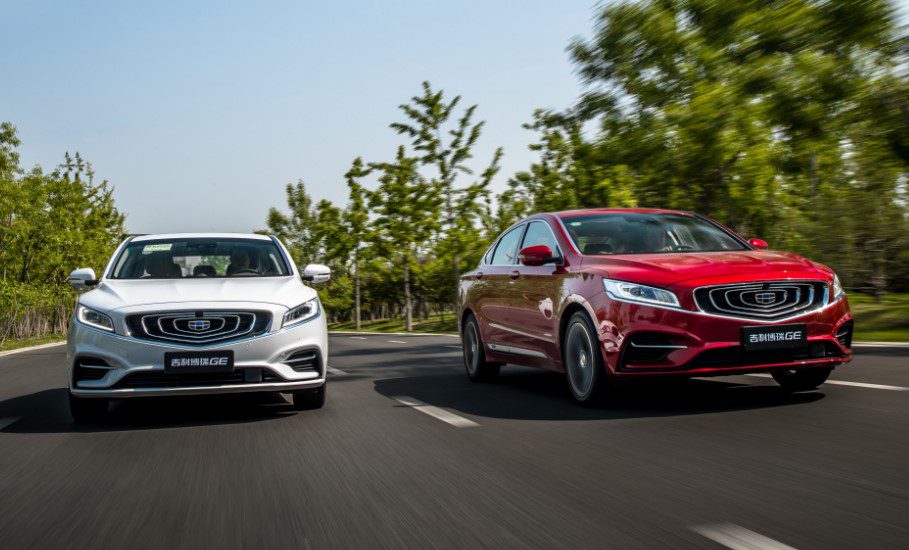 2018 May 11th, Shanghai. After driving 12 hours straight, a fleet of Geely’s newest flagship sedan, the Bo Rui GE MHEV, arrived in Shanghai from Beijing. Their arrival marked the successful completion of a 1,200km drive challenge without refueling.

With a rated highway fuel economy of 4.3L/100km, the Bo Rui GE has become the most fuel-efficient sedan in its segment. The Bo Rui GE is also the first mainstream model to come equipped with Level 2 autonomous drive technology, a 360° safety identification circle, the GKUI Geely Smart Ecosystem, and other features that enhance user experience and comfort providing occupants with a new comfortable smart luxurious travel experience. Together these attributes have pushed the Bo Rui GE into the leading position in the market as “the most fuel-efficient luxury hybrid B-segment sedan.”

2018 is a breakout year for Geely Auto’s new energy plan. As Geely’s first technological and smart flagship hybrid model, the Bo Rui GE is leading the industry’s development of new energy technologies with its 1.5T+7DCT plug-in hybrid (PHEV) and mild hybrid (MHEV) powertrain combination options, developed jointly by Geely and Volvo. The Bo Rui GE’s PHEV version comes with three charging modes including one mode able to provide a full charge in as short as 1.5 hours. The Bo Rui GE PHEV’s combined fuel consumption is just 1.6 litres per 100km. The Bo Rui MHEV version is the first B-segment mild hybrid to be produced in China and has a combined city and highway fuel economy of 5.8L/100km using the same 1.5T engine as a base. The MHEV version was also the one used in the 1,200km drive challenge.

On May 10th, the fleet of Bo Rui GE MHEV filled up and sealed their 70L tanks in Beijing in front of 20 media guests and other observers before officially departing for Shanghai. At 2am on May 11, the fleet of 10 Bo Rui GE MHEV arrived in Shanghai and had their intact seals inspected under the eyes of more than 20 media guest and other observers showing that they did not refuel anytime during the 1,200km drive challenge.

The entire journey exceeded 1,200 km and passed through six provinces including Beijing, Tianjin, Hebei, Shandong, Jiangsu, and Shanghai. Journeying through 44 cities the trip took a total of 18 hours with 12 hours spent driving. The average speed was 100km/hr with the average fuel consumption of 4.3L/100km. The lowest consumption witnessed in one 100km stretch was 3.7L, setting a new record for fuel consumption for MHEVs in China.

The star which made completing the challenge possible is the Geely and Volvo jointly developed powertrain and hybrid system. The 1.5TD engine generates a maximum power of 132kW, has a maximum torque of 265nm, and improves fuel efficiency by 38% from previous Geely engines. Matched with a 7DCT gearbox, one of the most efficient transmissions in the industry, the powertrain combination have set a new benchmark in the market for power performance, fuel economy, and NVH performance.

As much as it was a test of the Bo Rui GE’s fuel economy, the challenge was also an endurance test for the drivers which was made much easier by many of the GE’s luxurious features. The Bo Rui GE is the first mass-produced B-segment vehicle in China to be equipped with Level 2 autonomous drive technology such as ICC Intelligent Cruise Control, ACC Adaptive Cruise Control, APA Automated Park Assist, etc. Together with its luxurious cockpit that comes with an assortment of intelligent technologies such as GKUI Geely Smart Ecosystem, 12.3-inch high-definition central control panel, wireless mobile charging function, etc, the Bo Rui GE offers users an all-new new comfortable and luxurious travel experience.

The new energy wave is sweeping across the entire automotive industry. MHEV technology is the first of many new energy innovations setting new standards for consumers. Geely Auto is pushing forth the introduction of these new technologies by “becoming a leader in realistic new energy technologies that are not just made to be playthings for the rich, but to be used by everyone.” The 1,200km drive challenge on the eve of Bo Rui GE’s market launch at the end of May is a public demonstration that shows how Geely’s new smart hybrid flagship will reshape the B-segment market.