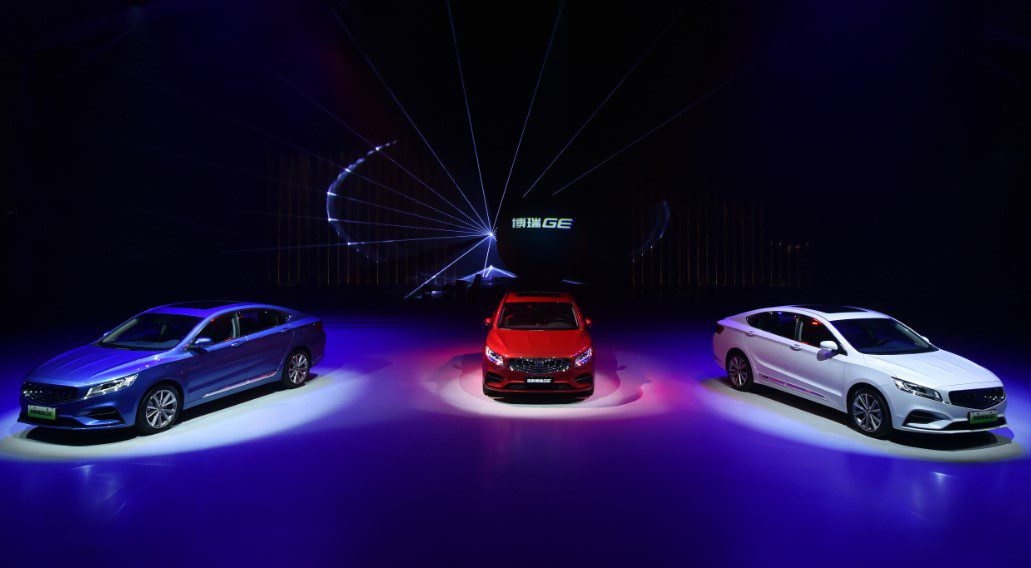 2018 May 28, Ningbo. At the Geely New Energy Strategy Keynote and Bo Rui GE Launch Ceremony, Geely unveiled to the world its strategy in the new era of new energy vehicles. “Geely Intelligent Power” is Geely’s diversified new energy strategy that follows four main technological pathways to becoming the global leader in new energy. Marking the Geely Auto Group’s entry into the new energy era was the launch of its smart hybrid flagship model, the Bo Rui GE which comes with both MHEV and PHEV versions. The Bo Rui GE sets a new global benchmarks in luxury, technology, and energy-efficiency for B-segment hybrid sedans.

Speaking at the keynote session and launch ceremony, President of Zhejiang Geely Holding Group and CEO and President of Geely Auto Group, Mr. An Conghui said “Quietly and gradually through over the past decade we have developed our industrial layout and accumulated experience, in order to achieve real change, to transform and lead the world in new energy. Geely follows a diversified and pragmatic new energy development strategy that puts importance on real substance than hype. In order to achieve our goals, we have invested far above the industry average in R&D, established four global R&D centers with over 2,500 world-class new energy researchers, created an innovative new energy R&D system, developed new vehicle architecture technology, and received hundreds of patents for core technologies.”

In 2015, Geely announced its “Blue Geely Initiative” with a promise that 90% of the brand’s sales would come from new energy vehicles and that consumers would be able to purchase hybrids at the price of traditional models by 2020. Following through on that promise and together with Geely’s iNTEC brand of technologies, Geely officially unveiled its new energy development strategy which follows four main technological pathways to becoming the leader of new energy technology, alternative fuels, fuel cell, pure electric, and hybrid technologies.

Geely has already proven the viability of three of the four technological pathways. In the field of methanol vehicles, Geely was one of the first to develop production models. After 12 years of research, Geely has developed four methanol engines, 14 methanol models, and received nearly 100 patents. By 2025, Geely will launch our first hydrogen fuel cell model. In the field of pure electric vehicles, CAOCAO, China’s first new energy ride hailing platform has already operated Geely’s battery electric models over a hundred million kilometers throughout China. Geely’s recently released Emgrand EV 450 has a globally leading range of 450km on a single charge. By 2020, Geely will release several new pure electric models capable of going over 500km on a single charge. And in the field of hybrid technologies, Geely has become the world leader with the launch of the world’s most efficient mild hybrid and plugin hybrid systems showcased on the new Bo Rui GE.

The Bo Rui GE MHEV is the first mass-produced mild-hybrid B-segment sedan. The 1.5TD engine provides 132kW of power and a maximum torque of 265nm. The 48V BSG mild hybrid system provides an additional 10kW of power and 35nm if torque giving the model a combined 142kW power and 300nm torque, as powerful as a 2.0T engine on the market today. The mild hybrid system improves response to .3 second from take-off compared to the 1 second that traditional ICE engines need, making it more suitable for urban road conditions. Acceleration to 100km/h takes 8.9 second, but the real highlight of the mild hybrid system is its improved fuel economy.

Speaking on Geely’s hybrid technology at the keynote session and Bo Rui GE launch ceremony, Geely Auto Group CTO, Feng Qingfeng said “The previous belief throughout the industry was that MHEV could only improve fuel efficiency by 10% at a maximum, Geely dared to do the impossible and reached a 15% improvement. Our breakthrough has allowed us to give the Bo Rui GE MHEV a fuel economy of 5.8L/100km. By 2020, we aim to bring that level up to 25% improving the fuel economy of B-segment vehicles to under 5L/100km. In regards to MHEV technologies, Geely has already become the global leader and will continue leading far into the future.”

Although Geely’s MHEV offers significant improvements, the company’s PHEV system offers even more. With the same 1.5TD engine, the Bo Rui GE PHEV comes with a combined maximum power of 192kW and maximum torque of 425nm. With an 11.3kwh ultra-high capacity lithium battery, it has a maximum pure electric range of 60km. In green travel mode, the Bo Rui GE PHEV has an average fuel economy of 1.6L/100km. In addition, the PHEV version can accelerate to 100km in 7.4 seconds, fully charge in 1.5 hours, and uses smart technologies to improve efficiency. All Bo Rui GE models comes equipped with a 7DCTH transmission jointly developed by Geely and Volvo.

The 7DCTH transmission is another piece ground-breaking technology that sets Geely apart from others in the era of new energy vehicles. The transmission specially developed for hybrid powertrains have a transmission efficiency of 97%, an unobtainable figure for transmissions on traditional ICE powertrains. It improves fuel economy by an astronomical 42.4% and improves power by 24%. In the future, Geely expects fuel economy improvements to increase to 50% and power to 30%.

As a smart hybrid, the Bo Rui GE uses smart technologies to improve efficiency. By using navigation data the vehicle can automatically select the most efficient driving mode in all road conditions. During a traffic jam, it switches to pure EV mode, on the expressway it switches hybrid travel mode, when the battery is low it uses the engine and regenerative braking to charge it. In areas where electricity is expensive, the vehicle can be set to charge at off-peak hours through the use of a mobile app.