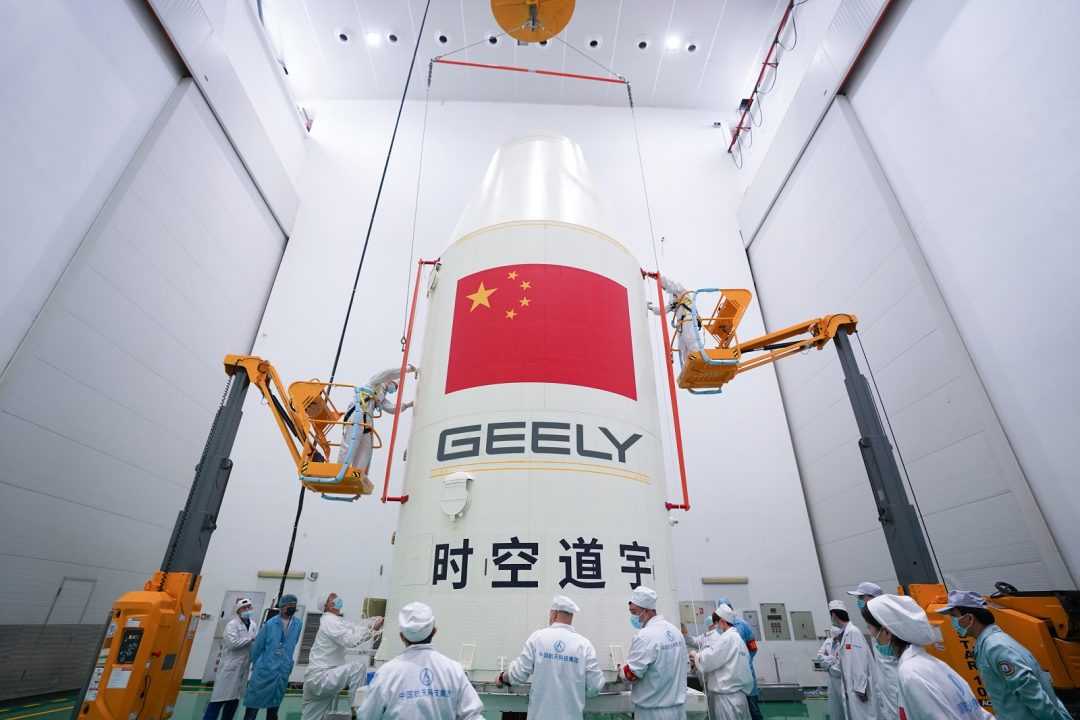 Geespace’s terrestrial base station in Korla, China has reported that they have connected the first nine GeeSAT-1 satellites and which are all functioning correctly post launch. These first satellites are part of a planned constellation – the “Geely Future Mobility Constellation” – that will consist of 240 satellites, with the first phase of 72 satellites expected to be placed in orbit by 2025. The second phase will follow consisting of 168 satellites.

Geespace’s GeeSAT-1 are the first modular, high-resilience, high-performance, mass-produced low-orbit satellites in China. They will provide centimetre accurate precise positioning and connectivity support for use by automotive brands in the Geely Holding portfolio, enabling true, safe autonomous driving that will connect vehicles with vehicles and infrastructure with vehicles to realise true autonomous driving.

Once in orbit, the sustainably developed satellites have an operating lifespan of five years, after which the satellites would propel themselves into earth’s atmosphere, where they will disintegrate without leaving any space debris.

With the successful launch and operation of Geespace’s first satellites, the company has become one of the world’s first providers of combined commercial Precise Point Positioning and Real-Time Kinematic services (PPP-RTK).

Planned applications in the near future include working with logistic sector partners to create the first one-stop logistics monitoring service platform with real-time management and control of the transportation process, helping protect the environment with Geely Holding’s “Blue Guardian” CSR project by monitoring maritime water quality and identifying debris patches to be cleaned. They will also empower the upcoming Asian Games with high-precision positioning, remote sensing, and satellite communication services.

Geespace operates and manages its satellite constellation through a network of ground stations in China established in Qingdao, Taizhou, Korla, Chengdu, and Harbin. Initially, service coverage will be provided to the Chinese market and the Asia-Pacific region with plans for expanding global coverage after 2026.

Tony Wang, CEO and Chief Scientist of Geespace said: “Many favourable factors such as policy support and market demand is accelerating the growth of the commercial aerospace sector. By establishing the Geely Future Mobility Constellation, Geespace is positioning itself to meet future user demands for high-precision positioning, space-based communication, and remote sensing services. In addition, by offering Geespace’s expertise and capabilities in commercial satellite production, AIT services, and satellite support infrastructure services to customers, new opportunities to develop have been opened in various sectors including smart mobility, consumer electronics, unmanned systems, smart cities, and environmental protection.”

Since its formation in 2018, Geespace has built up a full industrial chain for the development, production, and operation of satellites with R&D centres in Shanghai, Xi’an, and Nanjing, operations centres in Guangzhou and Qingdao, business development centres in Beijing and Taizhou, and a highly automated intelligent satellite testing and production facility in Taizhou.

Early in September 2021, Geely’s Intelligent Satellite Production and Testing Centre began mass production of commercial satellites with an annual production capacity of 500 units. Through intelligent modular manufacturing, Geespace is able to produce high-quality, easily customizable satellites to meet the growing global demand for commercial satellites. The GeeSAT-1 is only the first of many new satellite models from Geespace and its successful launch into orbit is just the first of many to come.