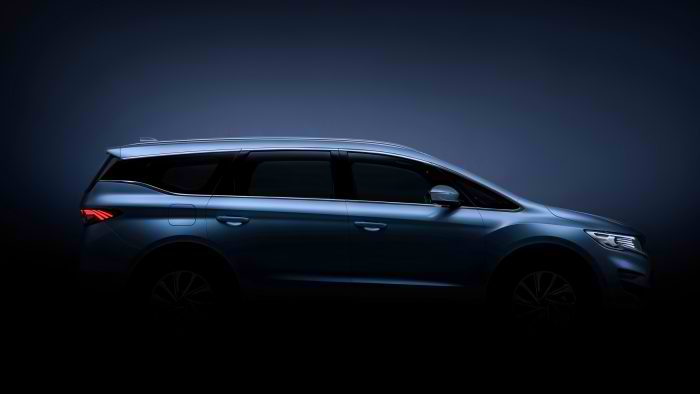 2018 September 25, Hangzhou. Geely Auto officially unveiled images of its first mass-production MPV. The yet to be named MPV expands on the stylish and technology platform that was first aired in Geely’s MPV concept exhibited at the 2016 Shanghai Auto Show. From the concept model, design elements such as Geely’s expanding cosmos front grille, streamlined body, flying arrow A-pillar, and floating roof were retained. Geely Design combined elements of a coupe with the temperament of a SUV resulting in a wide yet sleek body excluding a sense of speed and strength.

Geely’s first MPV adopts the brand’s new “racing through space and time” design language shown across Geely’s latest products, the Bo Rui GE and Bin Rui. The front face is sleek, stylish, and full of tension. The front grille is designed with three seemingly floating chrome rings gradually expanding outwards from the logo and a star-shaped lattice grille interior, the combination of which evokes an image of stars floating in the cosmos and gives people a sense of space and time.

In line with Geely’s “Blue Geely Initiative” where Geely committed to transferring upwards of ninety-percent of its sales to new energy vehicles, including hybrids and pure electric vehicles by 2020, the Geely MPV will make full use of new energy technologies.

This new Geely MPV will be launched in the Chinese domestic market towards at the end of 2018 and will be rolled out globally soon afterwards. Geely will continue to expand into new segments across the automotive spectrum.

More news will be revealed in due course.