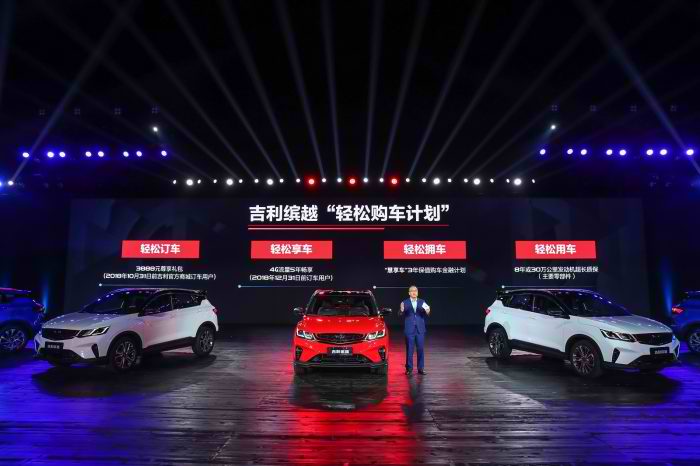 31 October 2018, Deqing, Zhejiang. Geely Auto’s first compact SUV based on the new BMA architecture was officially launched onto Chinese market. The Bin Yue has once again set a new standard in configurations and technology for global compact SUVs with its young, fashionable, intelligent, and sports genes.

Geely Auto developed the global B-segment Modular Architecture, BMA over a 4 year period. With a high-degree of flexibility and scalability as well as the latest advancements in the fields of safety, connectivity, new energy, and autonomous driving. With its foundation on the BMA, the length, width and height of the Bin Yue is 4330×1800×1609mm, with a wheelbase of 2600mm.

Thanks to the BMA’s unique characteristics of being optimized for interior space, the Bin Yue is compact yet spacious, achieving a 68.7% wheelbase utilization rate for the cabin. The new architecture also represents Geely Auto’s entry into a new modern era of modular vehicle development and production.

The Bin Yue gives full play to Geely Auto’s newest engine and transmission, allowing it to perform exceptionally in its class in terms of power performance and fuel economy. The Bin Yue comes equipped with either a 1.5TD+7DCT or 1.0TD+6MT powertrain combination.

The 1.5TD engine powering the Bin Yue was jointly developed by Geely Auto and Volvo and offers a maximum power of 130kW and maximum torque of 255 N•m. It works in tandem with a 7-speed wet dual-clutch transmission also developed jointly by Geely Auto and Volvo Cars. This golden powertrain combination allows the Bin Yue to accelerate to 100km/h in just 7.9s whilst having a combined city/highway fuel consumption rating of just 6.1L per 100km.  The power performance and fuel consumption rating has made the Bin Yue the new standard in its class.

The manual transmission configuration of the Bin Yue comes with Geely Auto’s newest 1.0TD engine which puts out a maximum power of 100kW and maximum torque of 205 N•m. It is matched with a 6-speed manual transmission. The economic combination balancing power performance and fuel economy allows the Bin Yue to have a combined city/highway fuel consumption rating of a low 5.3L/100km.

As a globally strategic model, the Bin Yue has undergone rigorous global tests during its development. The 1.5TD engine completed more than 12 million km of testing through Asia, Africa, Europe and North America. The 7DCT transmission has also completed over 6 million km of testing, covering all complex conditions on four continents.

Geely Auto has paid special attention to intelligent driving technologies in the Bin Yue with it reaching L2 level of autonomous driving with advanced driver aids that includes a smart 360° safety circle, raising the bar on the intelligent driving experience for compact SUVs.

ICC Intelligent Cruise Control is made possible through a combination of millimeter wave radar and high-definition cameras. ICC allows Bin Yue to safely travel at the driver’s desired speed, follow vehicles at speeds up to 150km/h, and even change lanes automatically. APA automated parking assist allows the Bin Yue to parallel park or park in lot with just a push of a button.

The new generation of consumers are always connected and matching their needs, the Bin Yue comes packed with smart connectivity features. Together with Geely Auto’s newest generation GKUI Geely Smart Ecosystem, the barrier between users and the Bin Yue as well as mobile to Bin Yue has been minimalized. Users can now talk directly to their cars, controlling all kinds of functions. Even when they’re away from their vehicles, they are still connected through their mobile devices which allows them to remotely control the Bin Yue. Unlimited 4G service and in-car Wifi keeps users connected to the rest of the world, wherever they are.  Real-time and over-the-air updates ensures the users receives a constantly improving experience.

Designed in Shanghai by a young and global design team, the Bin Yue’s design is based on Geely’s latest “Racing through Time” aesthetics and draws inspiration from young city dwellers who are self-confident and dares to challenge themselves every day.

The front exterior of the Bin Yue adopts Geely’s expanding cosmos grille with a twist, instead of the traditional cosmos that was shown on previous Geely vehicles, depth has been added to create the image of a vast expanse of stars with radiant headlamps that shine like dazzling stars. The wing-shaped waistline going from front to rear outlines the dynamic power inherent in the model. Complementing the waistline are the stylish Wings of time tail lamps.

The Bin Yue interior design has been inspired by the enveloping cockpit of a jet plane, which is full of technology. The instrument panel curves from the screen to the door panel creating a wide visual experience. The 7-inch LCD instrument cluster displays a wide-range of information including telephone, multimedia, navigation and driving assistance, and more. Also included is a 10.25-inch high-definition floating infotainment panel with a unique 8:3 large widescreen design. The screen’s 1920*720 HD resolution gives users a cinema-quality audiovisual experience.

The matte metal brushed strips are used in large areas of the interior panels. Many parts have also been inspired by sci-fi elements such as supersonic fighters and Star Wars such as the air conditioner which looks like jet engine outlets. The interior of Bin Yue comes in three color options: cool black, elegant brown, or dynamic red and black.

With its leading BMA modular architecture, advanced engine and gearbox, outstanding design, L2 autonomous driving capabilities, and rich configuration, the Bin Yue has re-defined what it means to be a smart compact SUV. As the newest representation of Geely Auto’s entry into an era of high-tech and high-quality vehicles, the Bin Yue not only enriches Geely Auto’s product lineup, it has also set a new benchmark for compact SUVs.

The Bin Yue will be available in China from Nov 1st and will be launched into global markets in due course.