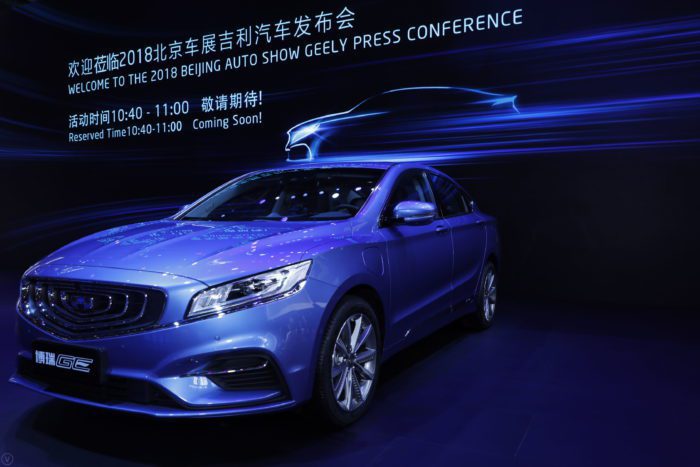 The Bo Rui GE was introduced by Geely’s Senior Vice President of Design, Peter Horbury. He said, “China has emerged as the largest market in the global car industry, accounting to about 40% of global sales with 30 million new cars each year. Chinese consumers have also become more sophisticated and mature than ever before. Working to satisfy the needs of this new generation of vehicle users has helped us evolved into a confident global brand capable of developing segment leading cars that contains subtle hints of its Chinese origin.”

The sharp-edged exterior of the vehicle resembles water under tension, where the calm outward appearance implies a considerable power within. Its tall wide grille beams with pride and the Geely identity rings, which represent our expanding universe, are now refined on a more elegant, fluid and twisting surface.

The elegant theme of the Bo Rui GE can be further seen on the front and rear lamps with unique 3D twists and movements inspired by traditional Chinese fans and the graceful twirl of a gymnast’s ribbon. The sedan radiates a life and spirit of its own, even when motionless.

The interior of the vehicle serves as a third living space for its users with much attention paid to giving it a technological and luxurious feel. Its Full Vision dashboard that was first previewed on the Emgrand Concept in 2015 has been fully materialised here. Also integrated into the dashboard is Geely’s recently launched GKUI smart ecosystem, creating a visually striking and fully connected infotainment panel.

Occupants of the Bo Rui GE have the ability to set the ambience of their car environment with 3 preset driving modes; Flame Red for sports, Crystal Blue for eco-driving and Amber Gold for refined comfort driving. There is also a floating 2-tier console housing Geely’s Energy Hub, which offers wireless charging for tablets, mobile phones or other tech devices.

The materials used in the making of the vehicle are even high tech. Wonderful brushed metal inserts add a precise feeling during the day and change to being secret back lit areas at night. This reveals a completely different pattern and provides a digital backdrop that links perfectly well into the Full Vision dashboard. The car also comes with a Geely smart key as an option, ideal for tech-savvy customers seeking ultimate control over their vehicle from anywhere.

As a plugin hybrid vehicle, the Bo Rui GE brings Geely a step closer into fulfilling its Blue Geely Initiative, where it plans to mass produce new energy vehicles by the year 2020. The company aims for 90% of its vehicle sales by that year to consist of new energy vehicles based on three core technologies, namely pure electric (EV), plug-in electric (PHEV) and hybrid electric (HEV). They plan for the new energy sales to be split into 65% for PHEV and HEV, while the other 35% will be coming from EV by 2020.

The Bo Rui GE was created for the new generation of users. Born in the mid-1980s and early 1990s, who truly appreciate the rise of Chinese technology and proudly use it in their everyday lives. They are self-confident and inspired by life.

The Bo Rui GE has been made available with two options, the first a PHEV that utilizes a 1.5T + 7DCTH powertrain that was jointly developed by Volvo and Geely brings fuel consumption down to just 1.6L per 100km. Whilst in a first for the Chinese market, Geely has developed a 48V mild hybrid version using the same 1.5T engine that brings fuel consumption down by 15% over the traditional gasoline version to just 5.8L per 100km.

“With the Bo Rui GE, we have created a flagship vehicle that embodies Geely’s ambitious aspirations. It represents a new standard for new energy”, ended Horbury.

The Bo Rui GE will be available on the Chinese market in the first half of 2018 with a gradual global roll out.