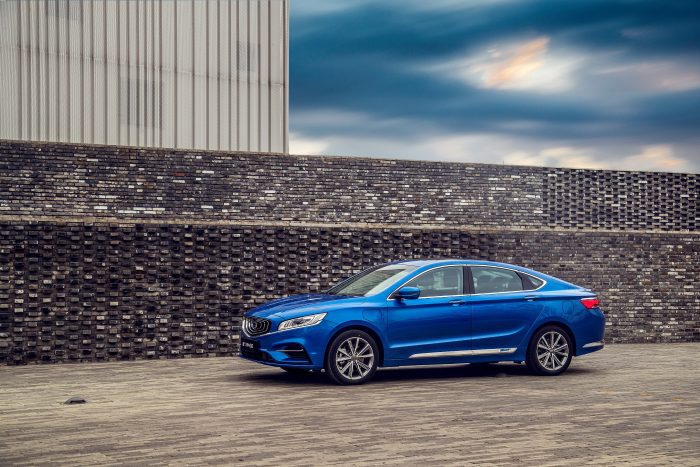 As China’s largest and fastest developing automotive producer, Geely Auto has been committed to its ‘Refined Cars For Everyone’ brand mission since the introduction of its Generation 3.0 vehicle range in 2014. The first vehicle to be added to the Generation 3.0 range of vehicles was the original Bo Rui, which became the best-selling domestic sedan in its segment. Besides outselling its rivals, the Bo Rui also became a diplomatic service vehicle within China and was the official car during the G20 Summit in 2016.

The Bo Rui GE was shown to the Chinese media at a special premier event in Suzhou, a city famed for its rich contributions to classical Chinese culture. Gardens, pools and rivers dotting the city were the inspiration for countless poems and stories throughout history, which served as the perfect backdrop to mark the sedan’s debut.

Based upon classical yet subtle Chinese elements, the Bo Rui GE has further refined Chinese-inspired design which were first shown on the original Bo Rui. It pairs strong Chinese aesthetics with global connectivity and new energy technologies, which enable Geely to once again create an even more impressive flagship vehicle.

The Bo Rui GE was designed from the outset to be Geely Auto’s most premium vehicle to date. At its core, the new flagship model focuses on comfort, technology, connectivity and new energy.

Exterior design was key to the Bo Rui GE’s position as the brand’s flagship vehicle; it has to make an impact on the road whilst being both graceful and elegant. Yet underneath the calm surface, one can look down on the sharp edges and intricate details given to the design; like water under tension just before it moves, implying that there is a strong energy below the surface. With a solid and impactful exterior, the GE looks like a modern and globally advanced product from far or near, without being too overbearing. As a flagship product, it is Geely’s most premium vehicle ever.

The interior of the Bo Rui GE takes inspiration from the cockpit of a futuristic starship and literally gives occupants an out-of-this-world driving experience by combining technology and luxury. The full-vision dashboard adopts a groundbreaking one-piece design that gives users a vibe similar to seeing a giant IMAX screen. A 12.3-inch central control screen incorporates all information sources including the recently launched GKUI Geely Smart Ecosystem into a single visually striking piece of technology. Geely’s premium and green technology is not only seen throughout the interior of the vehicle it can also be felt with ambient lighting throughout the cockpit environment synchronizing with the various driving modes; Flaming Red for sporty, Crystal Blue for Eco Driving, and Amber Gold for refined comfort mode.

The Bo Rui GE is set to launch into the market in May of 2018 and will make smart hybrid models the new mainstream. The new model targets China’s new generation of young innovative consumers who has a global vision and an international mindset. Their self-confidence and forward-looking beliefs make them eager to break down traditions and become trend-setters. Their unique spirit is the perfect representation of China today as it races into the new era.

The new model was launched on the heels of Geely’s record setting first quarter performance in 2018. In the first three months of 2018, Geely’s total sales volume reached 386,296, an increase of 39% from the previous year. This also completes 24% of the company’s annual target. Geely has seen monthly sales of over 100,000 for seven consecutive months since September 2017.