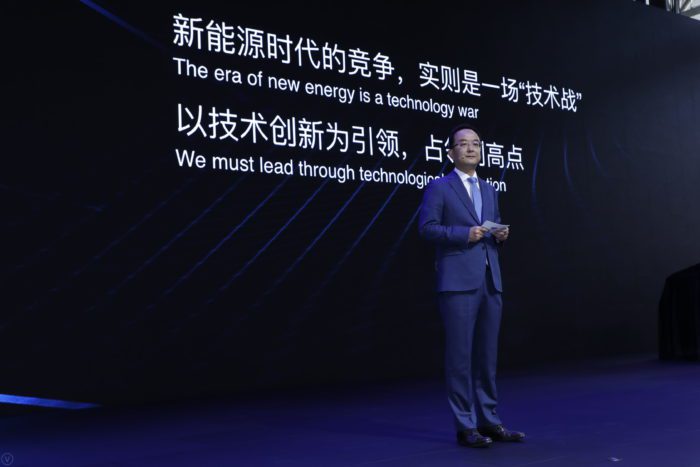 Speaking at the 2018 Beijing International Auto Show, Mr. An Conghui, President and Chief Executive Officer of Geely Auto Group said, “China will ultimately become the global center of a new energy revolution that will reinvent the car as we know it, hence making its automotive industry stronger and more resilient. As a leading Chinese automotive brand, we’ve realize that competition in this new era will come in the form of a technology war and that we must lead through technological innovation to become the vanguard of this new age”.

He further explained, “Geely realised this 12 years ago as we began our foray into the new energy sector by investing heavily in research & development, integrated our global resources, as well as strengthen the strategic collaboration we’ve had with Volvo. We’ve employed about 2,500 brilliant minds globally in new energy engineering to focus on the development of hybrid, pure electric, fuel cell and alternative fuel technologies.

Today, Geely is leading the world in new energy technologies along with their core intellectual property rights. Geely has steadily pushed forth on the development of fundamental technologies in the new energy field and its application through modularisation and platformitasation.

This is in line with the Blue Geely Initiative which was announced in late 2015, where the company aims to mass produce new energy vehicles by the year 2020. Geely Auto Group aims for 90% of its vehicle sales to consist of new energy vehicles based on three core technologies, namely pure electric (EV), plug-in electric (PHEV) and hybrid electric (HEV). The plan further entails that new energy sales will be split into 65% for PHEV and HEV, while the other 35% will be coming from EV by 2020.

Geely has unveiled the Bo Rui GE at the 2018 Beijing International Auto Show, Geely’s first intelligent hybrid sedan that is equipped with a 1.57+7DCTH plug-in hybrid system jointly developed by Geely and Volvo, this flagship model has a fuel consumption rating of 1.6 litres for 100 kilometres. At the same time Geely has also introduced a 48V BSG mild hybrid version of the Bo Rui GE, which improves fuel economy by 15% over the traditional gasoline version.

Geely also held the global debut of its avant-garde high-tech concept SUV, tentatively known as the Concept Icon. The concept demonstrates the car maker’s willingness to diversify and explore new trends in design.

“These cars serve as a prelude of Geely’s entry into an age where new energy vehicles will dominate our roads. This year alone, we shall be launching a whole array of new energy models and in the not so distant future, all of our platforms and product series will be fully electrified”, assures An.

He then summarised, “Geely chooses to be a pragmatic technology leader who makes practical cars for everyday usage and not just for show. This approach drives our efforts to achieve breakthrough results in the fields of vehicle dynamics, economy and intelligence. This enables Geely to be the undisputed leader in creating the world’s most economically efficient new energy vehicles”.