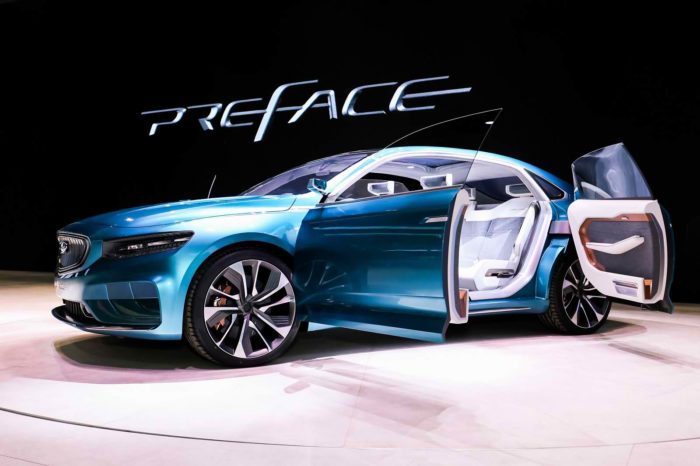 Through the usage of the highly flexible CMA architecture from its parent company Geely Holding Group, Geely Auto is able to create a vehicle that has a sporty and elegant profile. The PREFACE combines the safety of CMA, Geely Auto’s high standard of quality, and humanized intelligent drive technologies to offer users a sportier refined driving experience. The unveiling of the PREFACE shows Geely Auto’s insight into the future market trends, in which users demand more high-end, personal, dynamic products. The unveiling of a concept sedan signals a return to Geely’s roots in sedans and the brand’s intent on setting new benchmarks in the global market.

Designed in Geely Design Shanghai, PREFACE further develops Geely Auto’s Expanding Cosmos aesthetics. Vice President of Geely Design Shanghai Guy Burgoyne commented “This is a continuation of Geely’s expanding cosmos design identity, reflecting that we have completed an orbit, but we are not simply going around again, we are sling-shotting ourselves forward, onwards to the next great challenge.”

The PREFACE Concept is designed with strong proportions; a wide wheel track and balanced wheel to wheel arch relationship, resulting in both muscular shoulders and powerful fenders. The grille has been made wider and taller than on previous vehicles, allowing it to confidently separate the headlamps, whilst black vertical lines help create the image of a floating central logo. To accentuate its sporting attributes, a slight recess has been added to the grille, giving it an extra visual bite. Clamshell doors with frameless windows add a high-tech futuristic element to the model attracting the attention of a new generation of consumers.

Filled with cutting-edge technologies, PREFACE  exhibits the fast pace of Geely’s development and offers an insight into Geely Auto’s vision of the future high-end, personalized, sporty sedan.  Over the next two years, Geely Auto will launch several new globally orientated products as it implements its “global refined car development strategy” that will use its recently established international design and R&D resources. The unveiling at Shanghai Auto is a preface of what’s to come.