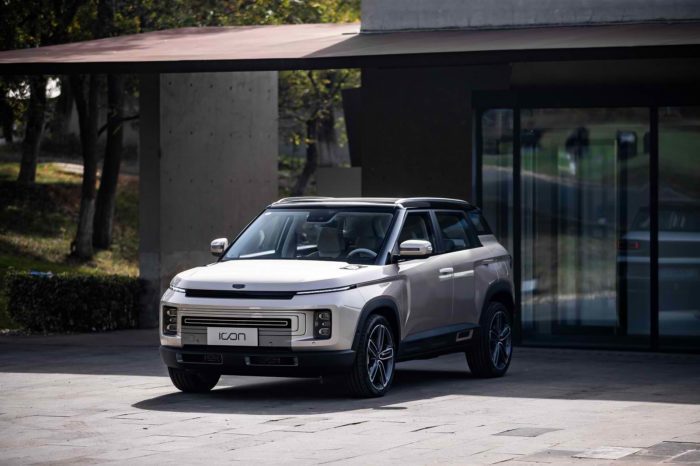 2019 October 30, Nanjing. Geely Auto’s (Geely) second B-Segment Modular Architecture (BMA) based SUV, ICON was unveiled to the media at a design seminar in Nanjing. Retaining much of the design seen on the well-received Geely’s Concept ICON shown at the 2018 Beijing Auto Show, ICON explores the limits of Geely’s design language and showcases an evolved version of Geely’s “Expanding Cosmos” design DNA.

Focusing on two words “high-tech” and “inspiring,” a new minimalistic and refined design language was conceived. Inspired by the 21st century design trend that “less is better”, the Geely ICON breaks away from the traditional SUV design trend and moves towards a purer 8-bit block form. From the onset, ICON has been a global model with initial concept drawings coming from Geely’s global studios. The exterior was conceived in Geely Barcelona and interior from Geely California, both of which was further refined in Geely Shanghai studio into the final production version.

The production version of the ICON retains nearly 90% of the features shown in the Concept ICON, a testament to the close work relationship that Geely designers and engineers have. ICON is the second SUV on Geely’s BMA architecture, with the first sedan being the Bin Rui sedan. The immense difference in design from the first BMA model, the Bin Yue SUV has shown the flexibility of Geely’s vehicle architectures.

The body of the Geely ICON retained the distinct blocky silhouette found in the concept version. Little was changed from the face of the production version including a more linear rectangular expanding cosmos grille, infinity loop head lamps, and futuristic slim smart LED daytime running lamps. From the side profile, flush pop-out door handles and side-view mirrors with integrated turn signals enhance the high-tech impression of the model. From the rear, the infinity loop motif is seen again in the rear lamps along with a linear rectangular expanding cosmos pattern.

The minimalistic exterior design continues into the interior. By subtracting and simplifying the interior, more space was created, balancing form and function. The dashboard is dominated by two big screens, an information panel and central infotainment panel. From the dual interactive screens, users can interact with the vehicle and connect to the rest of the world through the use of the GKUI Geely Smart Ecosystem.

The word icon means an idol of worship, a representative of an era, and also an icon in the digital applications. Choosing the name ICON for this model, shows Geely’s confidence in its avant-garde design and technology as the symbol of the times. Geely ICON aims to open a new era of smart mobility for a new generation of users, a generation that demands high-tech, inspiring vehicles.