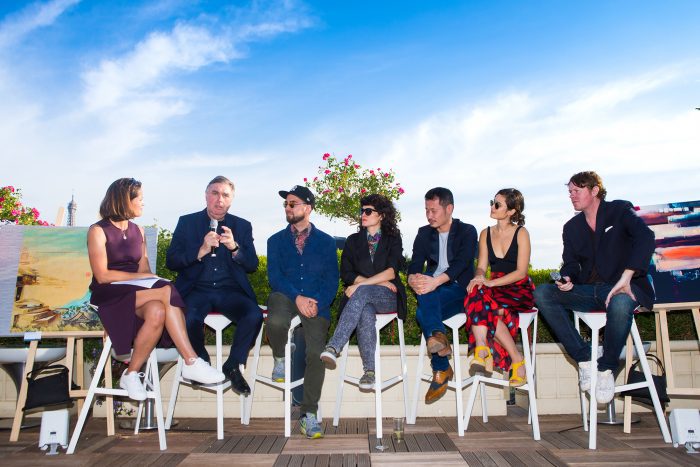 2018 May 31st, Paris. Geely Design welcomed the arrival of six Bo Yue SUVs in Paris this evening, with a special evening of art and design in one of Europe’s most creative and cultural cities.

Geely Auto delivered its 500,000th Bo Yue earlier this month, meaning that in just 25 months since its launch, more than half a million customers are now proud owners of this brand’s flagship SUV. Following this milestone, Geely embarked on a trip covering 18,000 km from Xi’an in central China to Goodwood on the UK’s south coast, in an epic drive that will take around four weeks to complete.  Paris marks the third official stop on this epic drive, the first being Moscow, followed by Hamburg and the home of Shell research and development – Geely’s global partner and supporter of this China-Europe journey, and tonight, the fleet arrives the French capital.

To mark the team’s arrival in Paris, Executive Vice President of Geely Design, Peter Horbury, along with two representatives from his Shanghai studio – senior interior expert, Justin Scully (from Wales), and exterior design director, Brandon Pan (from China) – hosted an evening entitled: Where East and West Meet in Art & Design – A Vision for Mobility in 2100.  The Geely car designers were joined by French artists Ben Gaudard and Julia Creac’h, and Chinese-American artist, Yaya Chang.

“It is wholly appropriate that we are here in Europe’s artistic capital working together with artists and car designers from east and west to envision what the future of mobility might look like.  I am very excited about the results, and what we have done for the Geely Design compositions is to envision multi-layered mobility in the next century, blending the legacy and the future. We look at how humans and mobility will interact and even have a guess at what our destinations might look like as well.  A ticket to Mars might indeed be a possibility in the future, and the question may not be how we get there, but rather, where else can we go? Whatever the answer, as a designer, I can say absolutely and confidently that envisioning the future is about as exciting and interesting a job as there is.”

Speaking about their artworks, the artists said:

“I have named my work ‘Transported’. Mobility is changing so we individuals don’t have to. While we are being transported and as technology evolves, it allows our minds to be transported even more, to have more time to let our minds wander and dream.

With this painting, Yaya Chang wanted to capture this intimate space that mobility of the future will enable, depicting a female in a seemingly domestic space in front of a large window. She does not notice that she is moving at tremendous speed, passing different worlds. While being transported, she is deeply focused on the letter she is reading which captivates her mind and becomes the only universe for her as she travels through many kilometres. Where she is going, where she came from, where she is , is not clear, but it does not matter. Travel is timeless.

The painting is an oil on canvas with large Chinese brush strokes.”

“We are honored to work collaborate with the prestigious Geely company. We wanted to create a dynamic piece, resolutely oriented towards the future. We’ve named it ‘Quantum Automobile.’

The mixed techniques (painting and collage) raises the question of entanglement and multiverse by asking which world are we going to create for 2100 and which car will we drive?

We wanted to blur the lines between organic structures and Design /Technology, the influences of the past in metamorphosis.

If we could travel time in the quantum reality, the car would not move. This is what the painting represents – a meta-car traveling in a dematerialized universe.”