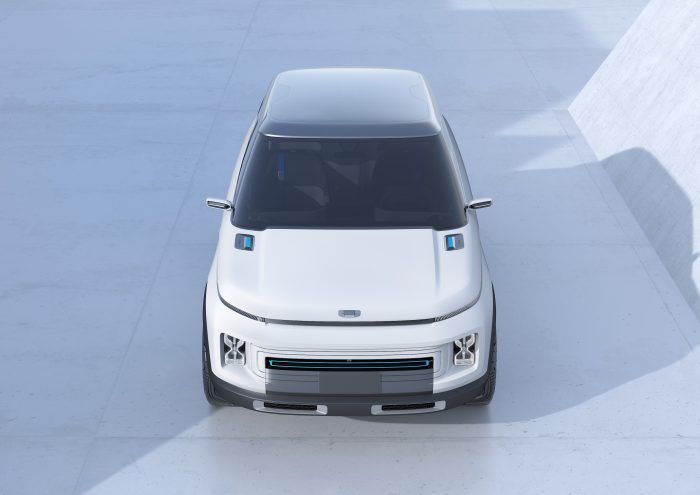 2018 April 25th, Beijing, China. Geely Auto Group held the global debut of its new futuristic concept car, the Concept Icon, at the recent 2018 Beijing International Auto Show. The car represents a new exploration into how far the Chinese automotive giant could stretch its DNA to provide a unique offering for future customers.

The Concept Icon’s was designed using a simple and refined design language that primarily focuses on two key words, namely ‘high tech’ and ‘inspiring’. This resulted in the creation of a technical product with distinctive features but retains its Geely’s character.

The entirely new concept car was developed at the Geely Design’s studio in Shanghai under the lead of the centre’s design chief, Guy Burgoyne. The project was undertaken as a way of expanding Geely’s DNA into new territories by taking into account the need of a new generation of consumer.

“What is an icon?” asks Burgoyne, who also holds the position of Vice President, Geely Design China. “To some, an icon represents their generation and embodies the spirit of an era. Today, in the 21st century, the term icon has taken on a new meaning. It is where an application starts on a digital journey. We took all these meanings together and applied them into our mobility solutions,” according to him.

Burgoyne further added, “The car has to visually look like an icon and hence why the blocky upright contour pushes it slightly away from the traditional crossover shape and brings the car’s design back to a flatter, 8-bit inspired design. Both surfaces and graphics have been distilled down to their minimalist form that is much in-line with present day gadgets, where it’s simple on the outside but hides a more complicated and technology focused interior.

Geely Design made the Concept Icon into a simple canvas on which intricate design pieces were placed, creating wonderful contrast and delight as one gets closer. For instance, the use of infinity loops that are featured on the front and rear lamps of the car can also be seen throughout the vehicle, notably through the glass roof. Geely’s expanding cosmos grill, which has appeared on all Geely Cars to date, has also followed the simplification process and was flattened down into a functional linear format but is still recognizable as a Geely vehicle.

The double clam shell doors of the Concept Icon open to reveal an interior that is coupled with subtle hints of technology. The team at Geely Design Shanghai gave special consideration to the information and telematics received by the driver. The central binnacle is seamlessly subdued behind the woven decoration and dissolves away when not in use, shifting focus to the central infotainment area. Other occupants of the vehicle on the other hand have the central and rear screens on which they may share information.

“A simplified interior also provided us with greater amounts of storage space, which proves to be useful as users today carry multiple devices on a daily basis. The Energy Hub floating console that was introduced in the Geely Bo Rui GE can be seen here, allowing users to wirelessly charge their devices on the go and exchange information via the in-car screens”, explained Burgoyne.

He then concluded, “The Concept Icon embodies the essential characteristics of Geely Auto and is an expression of the global confidence that we have in our design and engineering capabilities. This enables us to set new trends and benchmarks within the wider automotive industry. The Concept Icon is the true play”.