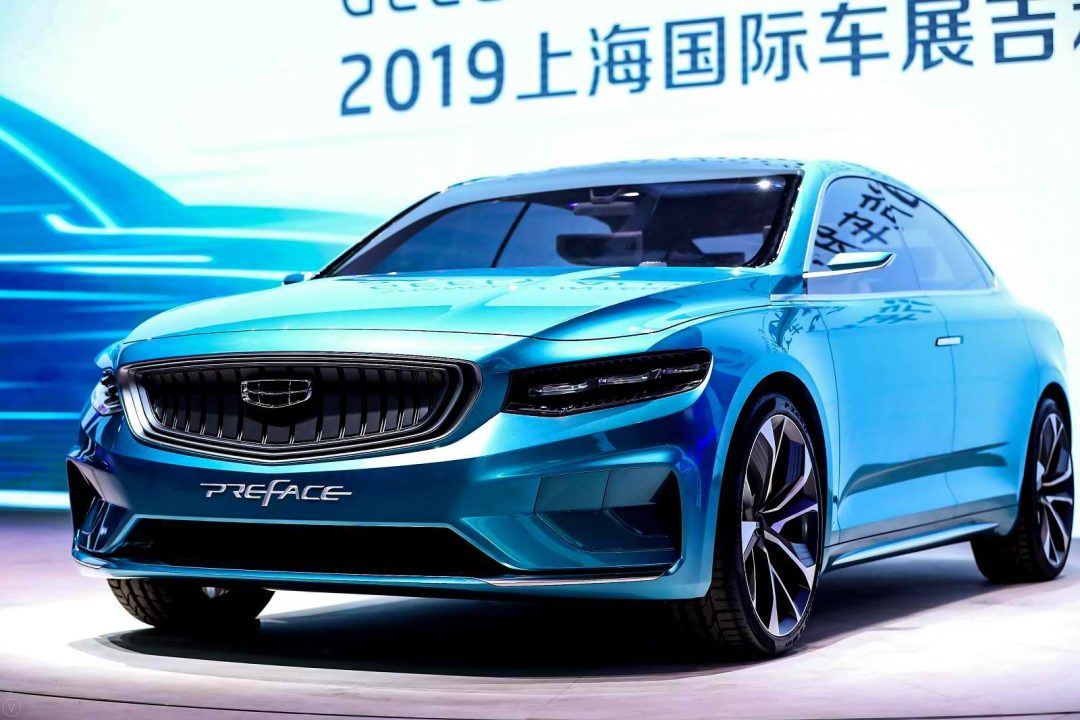 Geely Auto’s PREFACE Concept sedan, the brand’s first high-end sports orientated sedan based on the CMA architecture, further develops the brand’s Expanding Cosmos design language and previews the high-end, personal, sporty models that will launch in the future. PREFACE combines the safety of CMA, Geely Auto’s high standard of quality, and humanized intelligent drive technologies to offer users a sportier, refined driving experience. The unveiling of a concept sedan also signifies Geely return to its roots in sedans and the brand’s intention to set new benchmarks in the global market.

At the Shanghai Auto Show also unveiled a number of electrified models set to be launched this year including the Bin Yue Crossover in mild hybrid (MHEV) and Plug-in Hybrid (PHEV), and the Emgrand GL PHEV, the two models will be sold alongside the current MHEV + PHEV models offered by the Bo Rui GE flagship sedan and the JiaJi MPV. Geely’s upcoming PHEV models will use a 1.5TD engine matched with a hybrid powertrain system providing a pure electric range of 60km on a full charge.

Vice President of Geely Auto Group Victor Young commented “Our electrified product line showcases Geely’s commitment to the full electrification of its range and the brand’s ability to fulfill its promises. Geely is a strong force and active participant in the field of new energy and electrification.”

By the year 2022, Geely will take its “Blue Geely Initiative” to a new level with a complete range of new energy vehicles. Within five years, new energy and electrified vehicles sold by Geely Auto will have reduced as much emissions as re-growing 80,000 square km of forest. On April 11, Geely’s new energy brand Geometry and its first product Geometry A was officially launched with the option of 410km or 500km or range. Geely Auto will become the key player in the global pure electric vehicle market.

On the eve of the Auto Show, Geely Auto became the first official partner of the 19th Asian Games. Taking this as an opportunity, Geely Auto announced an initiative to comprehensively upgrade its brand and transform into an innovative technology enterprise built on core technology leadership, global development, and focusing on the user. Under the slogan “Enjoy E-mobility @ the Asian Games with Geely” Geely will develop a series of electrified, autonomous, smart and connected vehicles based on the Pure electric Modular Architecture (PMA).

Geely has been one of the first brands to popularize the use of L2-level autonomous driving technologies in mass produced vehicles in China. Now, Geely aims to achieve global mass-production of L3-level autonomous drive in the next three years and make real progress towards safe L5-level full autonomous drive. Geely has already undertaken 100 million kilometers of simulations and road tests with its L2 vehicles, Geely Auto will ensure that safe, reliable, advance self-driven vehicles will be available to consumers by the 2022 Asian Games.

From 2019 onwards, Geely Auto will use a new logo, evolving from its previous logo. The new refined crest still uses Geely’s core blue color which has been part of Geely’s visual identity since its first logo in 1997. Geely blue is seen as non-elitist and represents environmental sustainability in China. The second color used in the crest is quantum silver which stands for Geely’s commitment to innovation and advanced technologies. Black remains part of the Geely crest and represents a sense of mystery behind Geely, it emphasizes the brand’s power to surprise and be different from those around it.

Geely’s more driver orientated models such as the forthcoming Xing Yue Coupe SUV will use a pure black Geely crest with silver accents that highlights the driver orientated personality of the vehicles and emphasizes their sporting credentials. Geely Auto’s sister brand, Geometry, uses a Quantum Silver version of the standard Geely crest which reflects the brands emphasis on technology and the electrified future, while giving homage to its heritage within the Geely Auto Group family.

Today is a historic period within the global automotive industry. The global market environment is changing with many uncertainties ahead, however in uncertainty there exist opportunity. Geely will seize the opportunities that an industry in flux brings by focusing on “electrification, intelligence, connectivity and sharing” and transform into a technology focused mobility enterprise. By staying user-centric and innovation led, Geely will develop new benchmark-setting products. Entering a new stage of evolution, Geely is confident in its technology, product, brand, and culture.