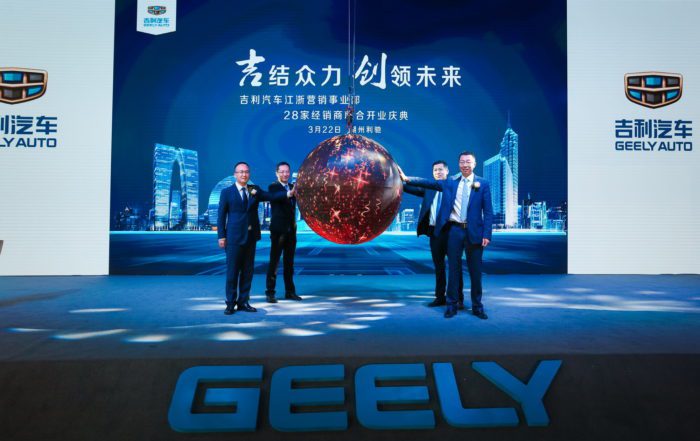 The high investment represents the confidence dealers have in the development of Geely Auto as well Geely’s increasing penetration in first and second tier markets in Eastern China. This new chapter in Geely’s market development in Jiangsu and Zhejiang is part of the group’s push to build a distribution network capable of supporting its “20200 Strategy” in which Geely Auto aims to reach 2 million in annual sales by 2020.

As a developed coastal region in China, the markets of Jiangsu and Zhejiang have always been a benchmark for the national market. Thanks to the hard work of Geely Auto and its distributors, in 2017 Geely sold 102,400 vehicles in Zhejiang, a 53% year-on-year increase. Zhejiang has become Geely’s largest markets with the brand ranking fourth in market share in the province. Sales in Jiangsu reached 64,000 vehicles, an increase of 55.8% year-on-year with Geely coming first in market share among Chinese brands in the province. In the first two months of 2018, Geely’s presence continued growing rapidly in the two provinces selling a combined 26,700 vehicles in Jiangsu and Zhejiang, a 40% year-on-year increase.

Geely has also performed well at in its home market of Hangzhou. In 2017, it sold over 24,000 vehicles in Hangzhou, a 60% year-on-year increase. Geely’s market share rose from 5th place in 2016 to 3rd place in 2017 behind the joint-venture brands of Shanghai Volkswagen and FAW-Volkswagen, evidence of Geely’s growing presence in first-tier markets. Geely’s explosive growth have given dealers great confidence in the brand.

As of February 2018, the total number of Geely dealers in China has reached 868 with each dealer selling an average of 1,314 vehicles each, an increase of 31% from the same period the previous year. With the introduction Geely’s 3rd generation of refined cars such as the Geely GC9, Bo Yue SUV, Emgrand GS, and Emgrand GL, sales of models priced between 80,000 to 150,000 RMB have accounted for over 60% of total sales showing the brand premium of Geely. More and more urban white-collar office workers and civil servants from the post-85 and post-90s generation are becoming Geely consumers. Over 50% of Geely cars sold in first and second-tier markets.

In a market where dealer profits are on average declining, over 95% of Geely Auto dealers are profitable and expanding. More than 118 new dealers joined Geely in 2017 with more than 60% of new dealers being located in tier one cities such as Beijing and Shanghai, but also expanding into other key regions such as Tianjin city, Jiangsu, Guangdong, and Fujian provinces respectively. Many dealers have converted from international brands, of the 28 dealers opened on March 22, nine converted from international brands.

In 2018 Geely will continue to lead through innovation, build momentum to reach a commanding position in the market, undergo a new round of upgrades, and become the leading Chinese brand in the automotive market.

2018 will also become a seminal year for Geely’s products. In addition to the recently launched 2018 Emgrand GL, New Emgrand, 2018 Bo Yue SUV, this year will see the launch of five new highly competitive models including SUVs, Crossovers, and MPVs as well as a range of new energy vehicles including pure electric, plug-in hybrid and mild hybrid solutions.

By 2020 Geely Auto will have over 1,200 dealerships capable of supporting 2 million annual sales and servicing the 6 million Geely Auto vehicles on the road today.