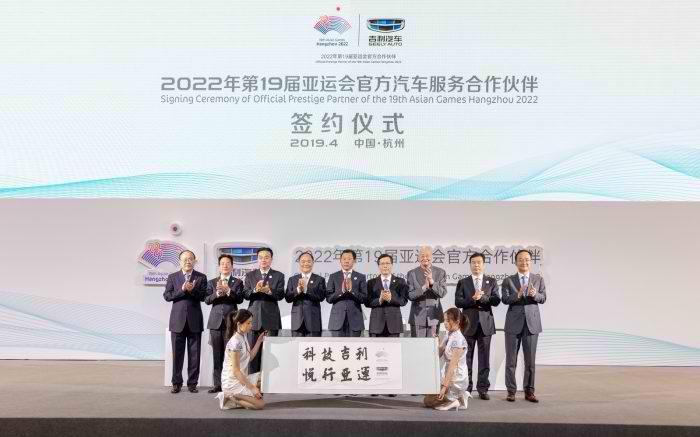 2019 April 13, Hangzhou. Geely Auto (Geely) will officially partner with the 19th Asian Games which will be held in Geely’s home city of Hangzhou in 2022.

Under the partnership Geely will work to develop a series of mobility solutions to service the 19th Asian Games including the development of autonomous connected, pure electric vehicles that will facilitate for the transfer of athletes and spectators around the key venues.

Hangzhou was selected as the host of the 2022 19nd Asian Games in September 2015 with the games including thirty-seven different sports spread across forty-four venues around Hangzhou.

Under the slogan “Enjoy E-mobility @ the Asian Games with Geely” Geely will develop a series of autonomous smart and connected vehicles based upon the leading Pure Electric Modular Architecture (PMA) that will allow Geely to showcase its edge in vehicle autonomy and connectivity. By the year 2022, Geely will offer a range of products based on the PMA architecture, including sedans, MPV’s and SUV’s.

Geely has always been a strong supporter of sports for example, supporting the Chinese Olympic swimming team at the 2016 Olympics and supporting motorsport culture within China by sponsoring Han Wei at the 2018 Dakar Rally and the Lynk & Co Cyan Racing Team for the 2019 World Touring Car championships.

Geely Auto Group President and CEO Mr. An Cong Hui commented: “In 2022, the Hangzhou Asian Games will be held in our home city. By 2022, in terms of transportation, environmental protection, energy saving technology, and intelligent technology it will be the best Asian Games ever. Geely Auto is working with the all of the organizing committees and strategic partners to make sure of that.”