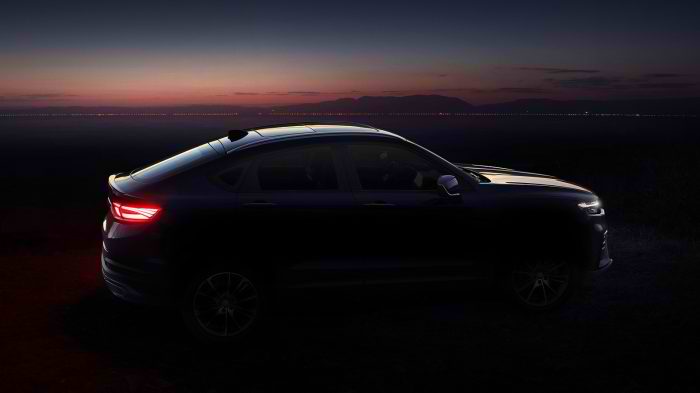 As one of Geely’s most assertively styled vehicle to date, the forthcoming Geely Coupe SUV showcases its sporting credentials with a wide and confident stance. Geely’s signature expanding universe grill is wide yet slim, further enhancing that assertive stance and the powerful daylight running lights give the Coupe SUV a strong predator cat appearance. Strong powerful shoulders that rise up around the grill coupled with the sculpted lower air intakes help the Coupe SUV hugs the ground and further emphasise that feeling of strength.

The silhouette of the Coupe SUV slopes upwards dramatically into a long tailing roofline that falls down sharply into the rear quarters, echoing the fastback designs of high performance sports cars.

Design elements that were first showcased on the Bo Rui GE, such as the Chinese fan inspired rear lights are present on the Geely Coupe SUV.  A new generation of day light running lights has been introduced on the new Coupe SUV; the ‘digital arrow’ which brings a new digital twist to an ancient weapon.

Design for the Coupe SUV was carried out in Geely Design Shanghai, one of Geely’s five global design studios managed by veteran car industry designer Peter Horbury, which have over 600 designers in total.

The Geely Coupe SUV, internally codenamed the FY11, is the first Geely product based on the Compact Modular Architecture (CMA). The CMA architecture was jointly developed by Volvo and Geely at the China-Euro Vehicle Technology Center in Gothenburg, where the two brands carry out joint R&D.

Further details on the Geely Coupe SUV will be announced in due course.

Compact Modular Architecture (CMA) was jointly developed by Volvo Cars and Geely Auto at the joint R&D center, China Euro Vehicle Technology Center in Gothenburg, Sweden. Over 2000 engineers worked for six years to make the CMA architecture which can be used by brands under the Zhejiang Geely Holding Group umbrella. The Modular nature of the architecture means that it can be used to create vehicles that fit each brands requirements as luxury, premium or mass market and also allows for each brand to create vehicles based on their market segmentation, i.e. MPV, Sedan, SUV or crossover. The flexibility of CMA also allows for multiple powertrain options, including pure gasoline, plug-in hybrid, mild hybrid and pure electric solutions.

Volvo Cars has used CMA to develop the Volvo XC40, which has won multiple accolades since its launch, including 2018 European Car of the Year. CMA will underpin all upcoming cars in Volvo’s 40 Series, including fully electrified vehicles. Co-developed together with Geely, CMA provides the company with the necessary economies of scale for this segment.

For more information about CEVT please refer to www.cevt.se